Written by our Subject Matter Experts, Updated on September 26, 2019 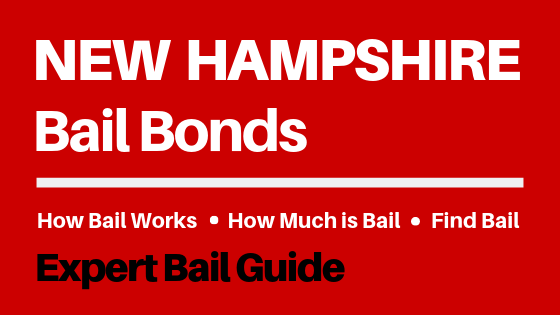 How do bail bonds work in New Hampshire?

Upon arrest anywhere in the state of New Hampshire, a person is usually processed at the local county jail. In order to be released from jail, several steps must occur, including being “booked in” and posting bail. Once your bail amount is set, it’s important to know your bail options so you can better understand how bail bonds work in New Hampshire.

Before using a bail bondsman, you should know all bail options that exist in order to be released from jail. Bail bondsmen will fall under surety, or bail bonds, which will cost you a small percentage of the total bail amount. You cannot get this bail bond fee back, no matter if you are guilty or not. It’s the cost of using a bail bondsman and the risk they take.

To avoid the fee, you have a few other options in New Hampshire. You can 1) pay in cash but you have to pay the entire bail amount; 2) the jail can release you on Own Recognizance (OR) which is typically used on smaller crimes committed and the judge finds you low risk and has strong confidence that you will show up to court; or 3) you can be released from jail by using a Property Bond. You will need personal property or land/home value that’s equal or greater than the bail amount. If you don’t show up to court or violate your release terms, the New Hampshire court will issue a warrant for your arrest and can take over your property.

If you decide to use a bail bondsman in New Hampshire, they can post the bond at the local jail. At this time the release process starts and typically can take anywhere from one to two hours to complete. Even though cash bonds are allowed, it is usually not a common practice due to it’s high expense.

New Hampshire Bail Bonds agents can aid you with all your surety needs:

How much is bail in New Hampshire?

There is a set 10% bail bond fee in New Hampshire. The Sheriff’s department will also charge you $30 on top of this fee to process the bail bonds. When working with a bail bondsman in New Hampshire, there may be various contractual agreements you have to sign off on before obtaining a bail bond, like regular check in, drug/alcohol testing, or other requirements.

One way to obtain a potential discount on your bail bond cost is to get ankle tracking. You can ask your bondsman for a bail bond discount if you agree to such terms. The goal is to limit risk for the bondsman and to reassure him you will show up to all your court dates. It’s very expensive for a bondsman to try and track you down if you skip bail and don’t show up to court.

Bail Bonds Near You in New Hampshire

Search for New Hampshire bail bonds companies via our form above; please make sure to enter the city AND state.

You can also check our city pages for a nearby New Hampshire bondsman.