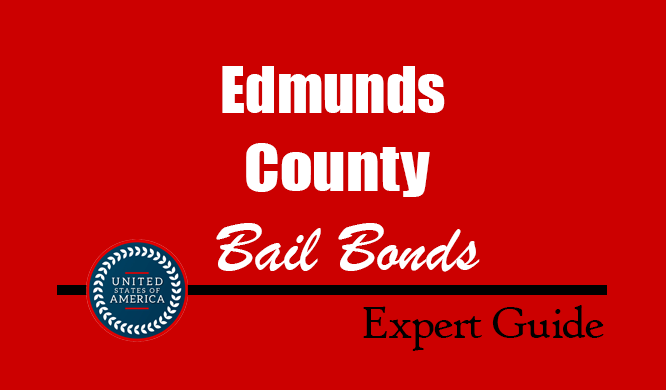 Our bail bonds listings cover all nearby bail bondsmen that service the Edmunds County, AL jail. Find contact information for each bail bonds company, and be sure to ask about payment plans and low % down options. When calling a bail bondsmen, you will need the first and last name of the arrested person and the name of the county jail they are located in.

How do bail bonds work in Edmunds County, SD?

Bail bondsmen will fall under surety, or bail bonds, which typically cost you around 10% of the total bail amount. You cannot get this 10% fee back in South Dakota, no matter if you are guilty or not. It's the cost of using a bail bondsman and the risk they take. Using the service of a bail bondsman typically requires collateral and someone to co-sign on the bail bond.

To avoid the 10% fee, you have 3 other options in South Dakota. You can 1) pay in cash but you have to pay the entire bail amount; 2) the jail can release you on Own Recognizance (OR) which is typically used on smaller crimes committed and the judge finds you low risk and has strong confidence that you will show up to court; or 3) you can be released from jail in South Dakota by using a Property Bond. You will need personal property or land/home value that's equal or greater than the bail amount. If you don't show up to court or violate your release terms, the South Dakota court will issue a warrant for your arrest and can take over your property.

Knowing your bail options helps you better understand how bail bonds work in South Dakota. Upon arrest anywhere in the state of South Dakota, a person is usually processed at the local county jail. In order to be released from jail, several steps must occur, including being 'booked in' and posting bail - the process of booking in typically consists of getting your mugshot and fingerprints taken, and having your arrest details inputted into the system.

When the bail amount is confirmed, a bail bond agent arrives to post the bail bond at the local jail. At this time the jail release process begins and typically takes anywhere from one to two hours to complete. Although cash bonds are permitted, it is normally not a common practice due to financial limitations.

How much does a bail bond cost in Edmunds County, SD?


South Dakota bail bonds don't have a set minimum or maximum cost structure, however bondsmen must comply with the rules set by the SD Department of Regulation which ensures fairness and access to bail. When you call a bail bondsman, you will need to ask what their premium fee is for the bail bond. The bail bond fee will likely be in the range of 10%, but your criminal history, flight risk, and crime committed could all play a role in the percentage that is charged by the bondsman.

Be sure to take everything into account when choosing your bail bondsman in South Dakota. It's possible that one bondman may charge you 10% for the bail bond but will put in place a lot of rules upon release. They may add contractual rules outside of bail bond fees, for example, requirements on tracking devices, check-ins, travel rules outside of the state of South Dakota and drug or alcohol tests. While you may save 5% on your bail bond fee vs another bondsman, is the 5% bond discount worth it to you considering the extra stipulations? They are not direct money costs, but they do take up your time from school and work and increase your risk of not meeting your release obligations.

Annual number of crimes that were reported to the police in Edmunds County, SD. Data is based on FBI crime statistics database.

Edmunds County, SD Bail Amounts for Different Crimes – How much is bail?

We provide estimates on average bail prices for different misdemeanor and felony crimes in Edmunds County, SD. These are estimates since the exact amounts can vary substantially depending on your age, details involving the charge, criminal history, and prior record of not appearing to court.

Key demographic data based on Census for Edmunds County, SD. Much of this information can be useful for bail bondsmen who are prospecting the county as a possibility to start a bail bonds business. Education, income, and employment statistics are vital in assessing the overall risk of a population when it comes to lending money for bail. Median home values are useful to determine collateral for property bail bonds.

Property bonds are a good way of making bail if an individual has equity in their property but very little or no cash. By looking at the median home values in Edmunds County, SD, we can roughly estimate the asset potential the county’s residents have.

One of the shortcomings of the bail system is the time someone can be stuck in jail – it’s often enough time for a person to lose their job. To make matters worse, having a tarnished record further complicates matters. This is why we are listing reputable job centers near Edmunds County, SD to help get people back on their feet.